Canola hybrids availability is contingent on meeting achievable supply chain logistics.
Net weight per bag on all canola products shipped is 35 lb.
All seed is certified Blackleg-free and certified non-GMO.
All Rubisco Seeds’ canola hybrids are approved for the European Market.
Seed can be purchased through your preferred local retailer. 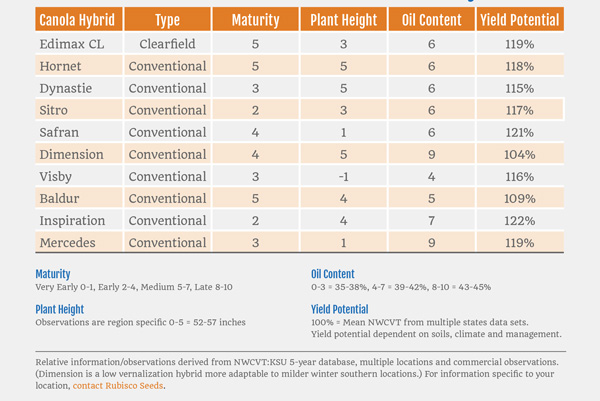 Diversification of cropping as a risk management tool

Canola is a relatively new crop in the U.S. and currently occupies approximately one million acres of cropland annually. The word “Can-o-l-a” is derived from “Canada-Oil-low acid” following selective breeding for lines of Brassica napus and Brassica rapa that contained less than 2% euricic acid and less than 30 micromoles of glucosinolates.

Canola seeds contain 40% to 46% oil with the remainder of the seed being processed into canola meal, a high protein livestock feed. The oil also can be used as a feedstock for Biodiesel.

Canola Oil has the lowest saturated fat and highest unsaturated fat of all vegetable oil, it is cholesterol-free and is a good source of the antioxidant vitamin E.

Canola oil contains linoleic acid (LA omega-6) and alpha-linolenic acid (ALA omega-3) essential fatty acids at 2:1, making it as one of the healthiest cooking oils, being only second to flax for omega-3 levels. It has been shown through studies that the ALA found in canola oil has a positive effect on cholesterol, blood pressure and inflammation and comes with FDA-approved health claims stating its effectiveness in reducing heart disease risk.

Differentials in oil and meal derived from canola, industrial rapeseed (H.E.A.R) and other members of the diverse Brassica family are outlined in a letter sent to all U.S. Departments to increase awareness in all U.S. states.

Canola seed lots are tested according to the AOSCA, USA methods and procedures or ISTA rules.

Cleaned canola seed is sampled and analyzed for purity and germination prior to delivery.